What I been doin’ lately — for real — in a jam kitchen that’s been around since the early 1900’s — a magical place on the edge of a wildlife and nature preserve — yeah! I be jammin’ — how good can life get? Oh yeah, try working in a flower shop up the road, too — with a great couple — yeah, that’s how good life can get…jammin’ — oh yeah, I hope ya like jammin’ too…

Yes, Sandy’s little boy. I’m captivated with Lou. Ever since I saw them on the cover of People Magazine a few weeks ago. She’s one of the few celebs I “like” in the way one can like someone they don’t really know.

Even got a torn up copy of People from my hairdresser after she’d looked at it — I have it on my porch and every time I look at the cover I smile. Couldn’t get the picture out of my head — so much so, that I even had a dream —

I was babysitting the little guy, and was hanging out in my son’s basement with him
(the babe, not my son; my son doesn’t really have a basement). In the dream, I was spying on my son because I was afraid he was addicted to drugs (he’s not, I don’t even think he has ever done them, I could be wrong, people change, but let’s just say I know my boy. Drink yes. Smoke cigs yes. Drugs? Highly unlikely.).

So there I was hanging out in the basement spying on my son and Louie’s diaper needed a change but I’d forgotten to bring diapers. So what did I do? Turned the one he was wearing inside out — even though it was sopping wet, I figured it was better than nothing. You know how it goes in Dreamland.

There are things I wish I’d done differently with them, but overall, I did the best I could as a single parent with two very bright (and strong-willed) children. The times I regret are the times I listened to others’ wisdom rather than my own. But I want to look ahead and not continue to beat myself up over the mistakes I made.

There were plenty I didn’t make — like my decision to stay home with my son rather than pursue a career. 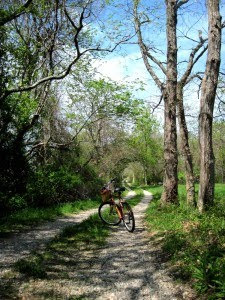 It’s not a path that’s new to me, it is the one I eventually return to when I’ve had enough. Enough of my dark night of the soul.

May — a new month, the month of Mary, of mothers, of flowers, Beltaine, soft blooms, and new beginnings all staggered according to genus and species. Mine will be staggered according to mood, inspiration and whimsy. Just finished the book The Happiness Project, and I gotta say, I liked it. It got me thinking. About changing my attitude. Which can be slow going when past demons start licking like tiny flames at past hurts that still aren’t resolved. There’s a saying, sh!t or get off the pot. I’ve been in this spot before (the stuck spot), and I’ve turned it around. It really does work. Changing my attitude I mean. And it does seem to change my life — open up more doors, more possibilities. I’m all for my woo woo therapies, and what have you, but sometimes I just need a good (and swift) kick in the arse.Sometimes tenderness and tolerance, time and so on are in order. But enough is enough. It’s time to start my own happiness project. And honor divine inspiration when it hits me. And it does hit.