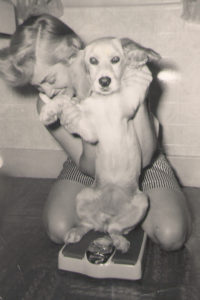 Rhoda Jane Hurley died the evening of Friday, July 22 surrounded by many loving family members. To be honest it was a shock. She was very much like the Energizer Bunny, always rallying and roaring back stronger than ever. Not this time.

She was born in Claremont, NH on October 8, 1938 to Lottie Mae and Clifford A. Densmore, the fourth “surprise” with much older siblings. Her fondest childhood memories were of her mother’s beautiful home and gardens, and she used to reminisce about the fresh garden vegetables — tomato sandwiches, cucumber sandwiches, radish and butter sandwiches and gorgeous salad plates her mother would lay out. She had a pet pig, who would meet her after school and she was allowed to shoot at cans for recreation. Her parents’ deaths in her eighth year haunted her all of her life, but she persevered, raised by her older sister, Carol, and traveled to a bigger world than Claremont. Her sister was married to a Navy man, and they lived on Chicago’s North Shore in a striking Art Deco apartment building at 5200 Sheridan Road for a few years. When she was 11, she traveled by plane to her maternal Grammy Angela’s in Maine, a place she felt cared for and well-loved. She had deep roots throughout New England, with ancestors having fought at Bunker Hill and in Shay’s Rebellion.

Rhoda finished her school years in Rhode Island, graduating from No. Kingstown High School in 1956, where she was known as “Rhody,” a swell gal with a terrific personality, the nicest girl in the senior class or any other class. Just a blue-eyed blonde, never known to wear a frown, her sunny disposition won her many friends. She planned on entering the nursing field, but met a dashing young Marine named Bill Hurley at the Hingham Marine Barracks pool, and nursing school became a distant memory. Roller coaster rides at Nantasket Beach, followed by Bill’s many trips to RI while courting, led to marriage on January 16, 1957 in E. Greenwich, RI. They had no real honeymoon, but in March of 1957, they were off to NC and the journey began.

Within six years, there were many moves to various bases throughout the South. Four daughters were born, and her husband was off to the Mediterranean and the Caribbean for the Cuban Missile Crisis, and other assignments. Through it all, she held home base together while her husband did his job, all this by the age of 25, with four girls, ages 5 and under.

In Quantico, life settled down for a bit, with Bill back on base. She pursued Altar Rosary, ceramics classes and decorating her home as the girls grew a bit.

In the summer of 1967, after a Cape Cod vacation, Bill moved her to a house in a brand new Hyannis neighborhood. Within a week, he was off to Vietnam and Rhoda settled into an unfinished house with her girls, ages 3 through 9. Throughout his “tour,” she set about finishing their house, had a midnight sled ride one snowy night with neighbors down the only hill around, and set about worrying about Bill during the Siege of Khe Sahn while caring for their daughters. Her girls were her life and she particularly loved their school vacations when they were home with her. The winter of 1968, she finally had that honeymoon in Hawaii with Bill when he had his R and R from Vietnam. When he returned for good that summer of 1968, the next move was to Ohio Steel Country to run the Marine Recruiting Center. It was the turbulent times of Kent State and Vietnam protests, but after two years they returned to the Cape for a couple of years so Bill could finish college, before it was off for another tour, this one in California. In 1974, they returned to the cape for good, with Bill doing tours of duty that didn’t require moving the family.

Rhoda loved interior design, refinishing furniture, and making a home. She was a long-time subscriber to Better Homes and Gardens, she loved reading, especially history, biographies and mysteries, and she was an avid map collector. Her love of geography she shared with her son-in-law, Patrick with a yearly subscription to National Geographic. Although a homemaker, she was also very much a business manager, keeping a meticulous household and records. She dressed impeccably, and Kathleen Needham used to tell Rhoda’s daughter “your mother was always so glamorous.”

Her daughters’ friends all loved her as she did them, particularly Holly Murzic Romotsky, who predeceased her in 1986. She swapped her car for Holly’s 1960’s battered Rambler wagon one weekend so daughter “Patti Ann” and her friend Holly, would have a safe, reliable vehicle to travel off-cape in. She knew what she was in for and loved to tell the story, as sometimes you had to lift the Rambler’s hood and use a wrench on the choke to get it to start.

Rhoda was a great storyteller, and she could tell you a good one, full of colorful details if you had the time to listen. A smart, independent woman with a sharp tongue and a memory like an elephant’s, she had a sense of humor, loads of personality and was known as a “hoot,” “feisty,” and a “cool lady.” She adored dogs, particularly Bucky, her beloved Obi (with his own room and loveseat), Joey, Bob, and numerous Sullivan canines. It was a mutual admiration society.

It was hard letting go of her daughters as they left home, but fortunately there were grandchildren to sustain her for a few more decades.

Daughter Jacqueline remembers most “my mother calling me JJ, how much she loved me, how much she loved her son-in-law Patrick, and how much she loved our daughters Meredith and Caroline. I will always know these things to be true.” Betsy recalls the time when she was three and Rhoda left her at the Base Nursery Care while she shopped once. Afterwards, in the car Betsy stood in the back seat, ranting at her mother, “Don’t you ever leave me. I am not ready for you to leave me!” Betsy remembered “Oh I was mad at her. She was so flustered I think that was the time she ran a red light and got a ticket.”

Niece Debbie recalls wild times — “one that immediately comes to mind includes flying dishes,” and her mother, Patsy, Rhoda’s older sister — but also healing times. “Reconnecting with your mother was a wonderful thing. It helped me in dealing with my mother’s death, and it helped with some of my unresolved anger. I love your mother as if she were my own, but without the hurtful baggage.” Spirited Densmore girls, flying dishes, sisterly shenanigans, but always love in the end.

A few years before she died, Rhoda reminisced, about Betsy’s birth, life in Chicago, her mother’s garden, her own beautiful penmanship and how daughter Kathleen’s penmanship was just as beautiful. She’d cry sometimes, saying how much she was going to miss her children when she was gone.

According to Marty, Patricia’s mate, “We never agreed on anything. She was a conservative Republican. I was a liberal Democrat. She loved the Mannings. I loathed the Mannings. She loved horse racing and hated baseball. Quite the opposite for me. The one thing we did have in common is that we would never concede defeat when we got in an argument. After a time, we tended to avoid hot topics, knowing that it was futile to think that either one of us would concede to the other. More recently I would call her on a regular basis, usually in the evening. Rhoda tended to take her frustrations out on Patricia so I decided I would take up some of the burden. After a short while I ended up enjoying our conversations. We eventually were able to even talk politics, as she became a disgruntled Republican and I a disillusioned Democrat. We found a common ground. I miss our evening chats already. I suspect we’ll resume them in a future life — another place, another time, but never recalling our past. Until we meet again.”

As granddaughter Molly writes,” To my best friend, spirit animal, and the woman who gave me all my sass, style and sweet tooth, my heart is in a million pieces without you. Wherever you are, Gram, I hope the decor is impeccable and the Manishewitz is flowing. I’ll meet you there someday. I’ll miss you forever. I’ll love you for always.”

A closing note in her yearbook from high school pal Bub “Lanky” Ramstead read, “To Rhoda, If in heaven we don’t meet, hand in hand we’ll stand the heat. Lots of luck.”

The last word: If Rhoda were reading this she’d snap, “That’s not the way it happened!” and she’d proceed to set the record straight. The story never ends. We miss you, mama.

**We always pronounced it Mum or Mumma. 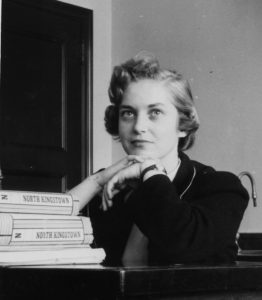 I haven’t had a deliberate moon practice in a bit, but the Wolf Moon of 2015 seems like a good starting point for me, particularly as it relates to protection of self, hearth, and family (my idea of it anyway). I have a huge gold glass ashtray from my mother’s smoking days and it’s perfect to burn my sage in, as well as slips of paper I’ve written on — guilt, judgment, fear, clutter and doubt. These are things I am looking forward to releasing in the coming year — a huge task for me, but if I were going to have Colleen do a phrase for me, it would be what I remind myself when faced with big ideas — “baby steps.” Mother, may I? And a resounding “yes” is what I hear.